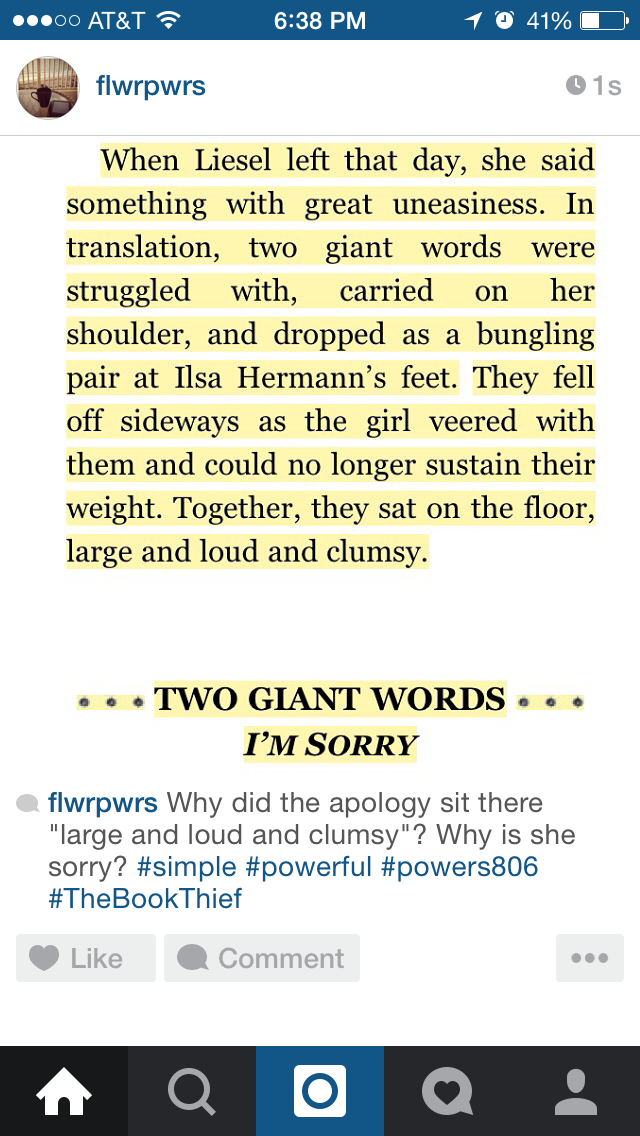 Why did the apology sit there "large and loud and clumsy"? Why is she sorry?

Beyond the questions --- Just the language... Markus Zusak masterfully crafted this moment.

What part of today's reading did you find powerful? Why? What did you notice & note?

Posted by Unknown at 6:46 PM No comments:

A Collection of Favorite Moments

We just started reading The Book Thief, and we already have favorite parts!  Thank you for sending me snapshots of your books! 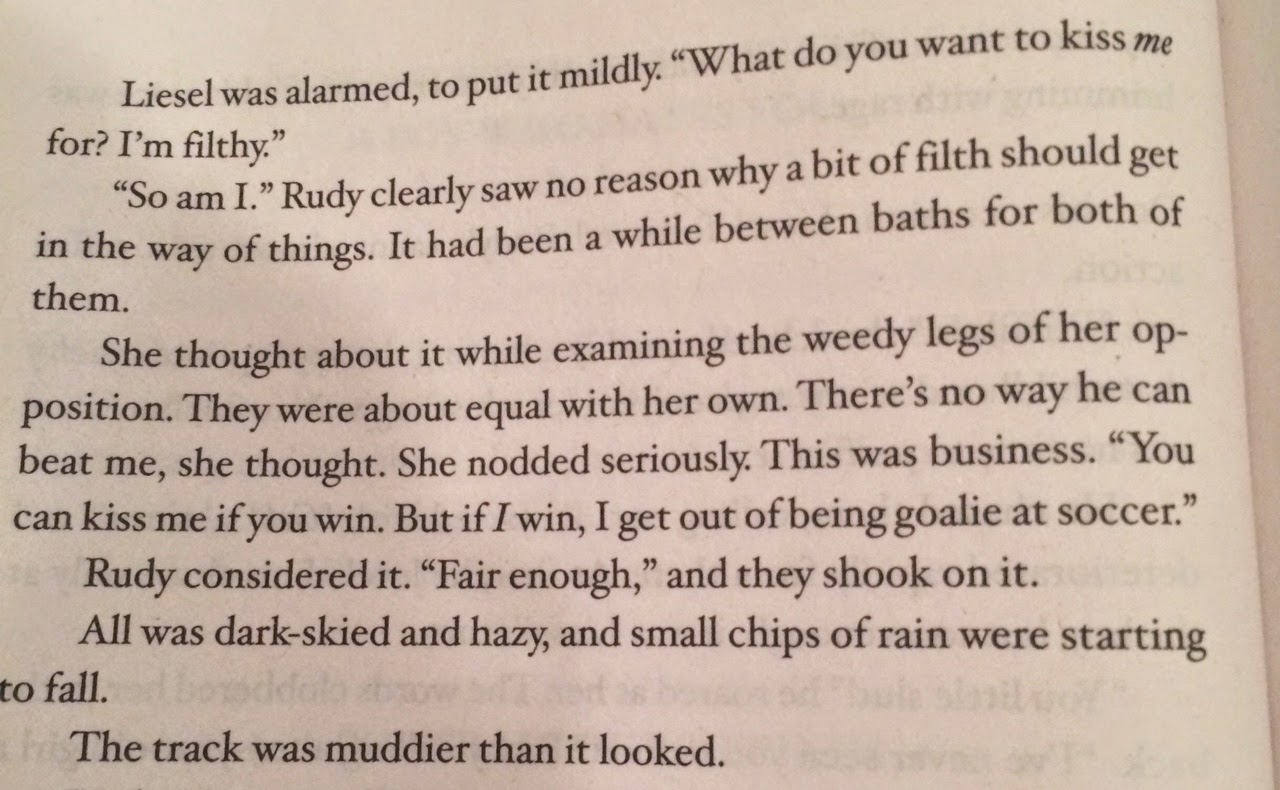 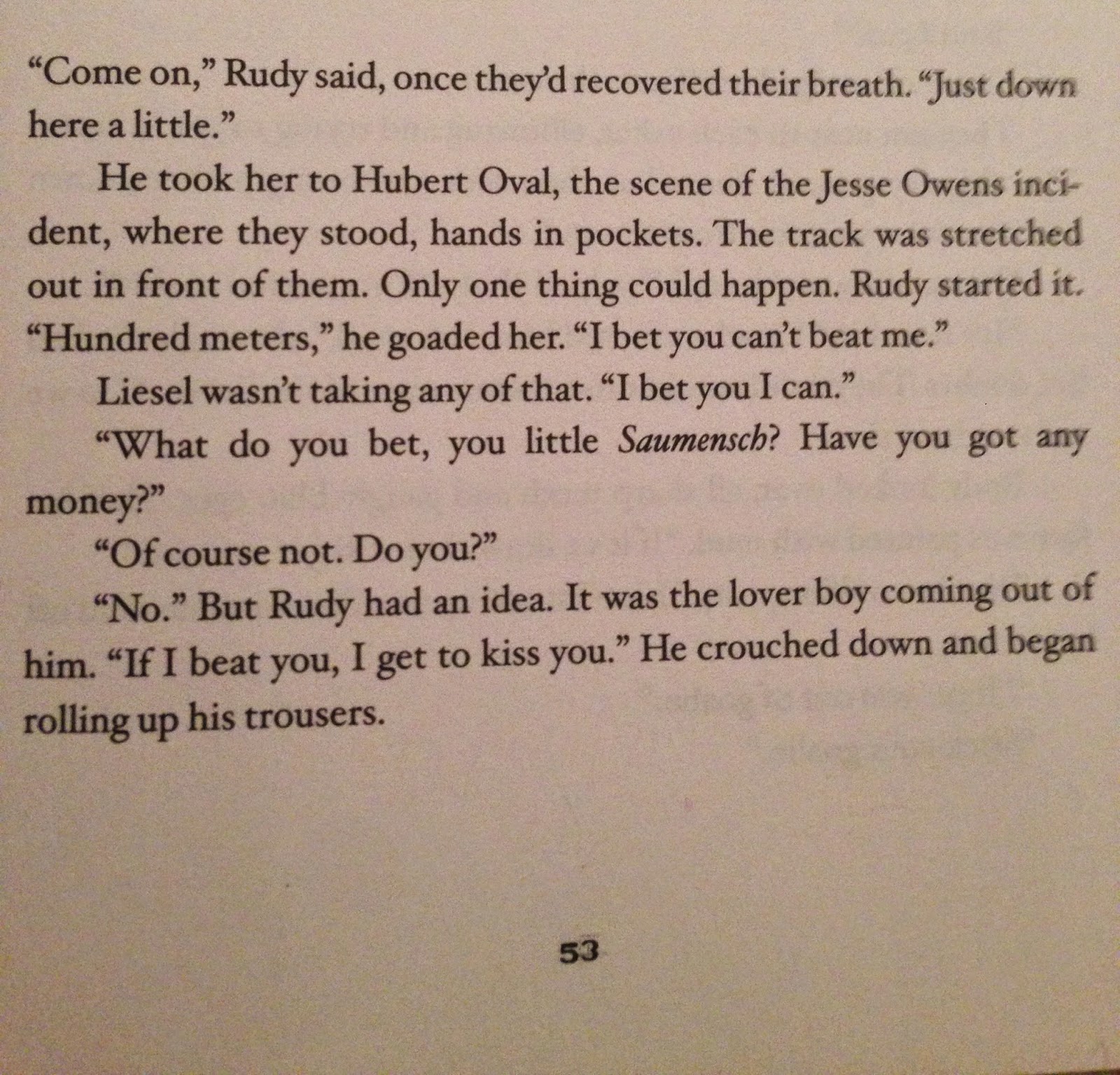 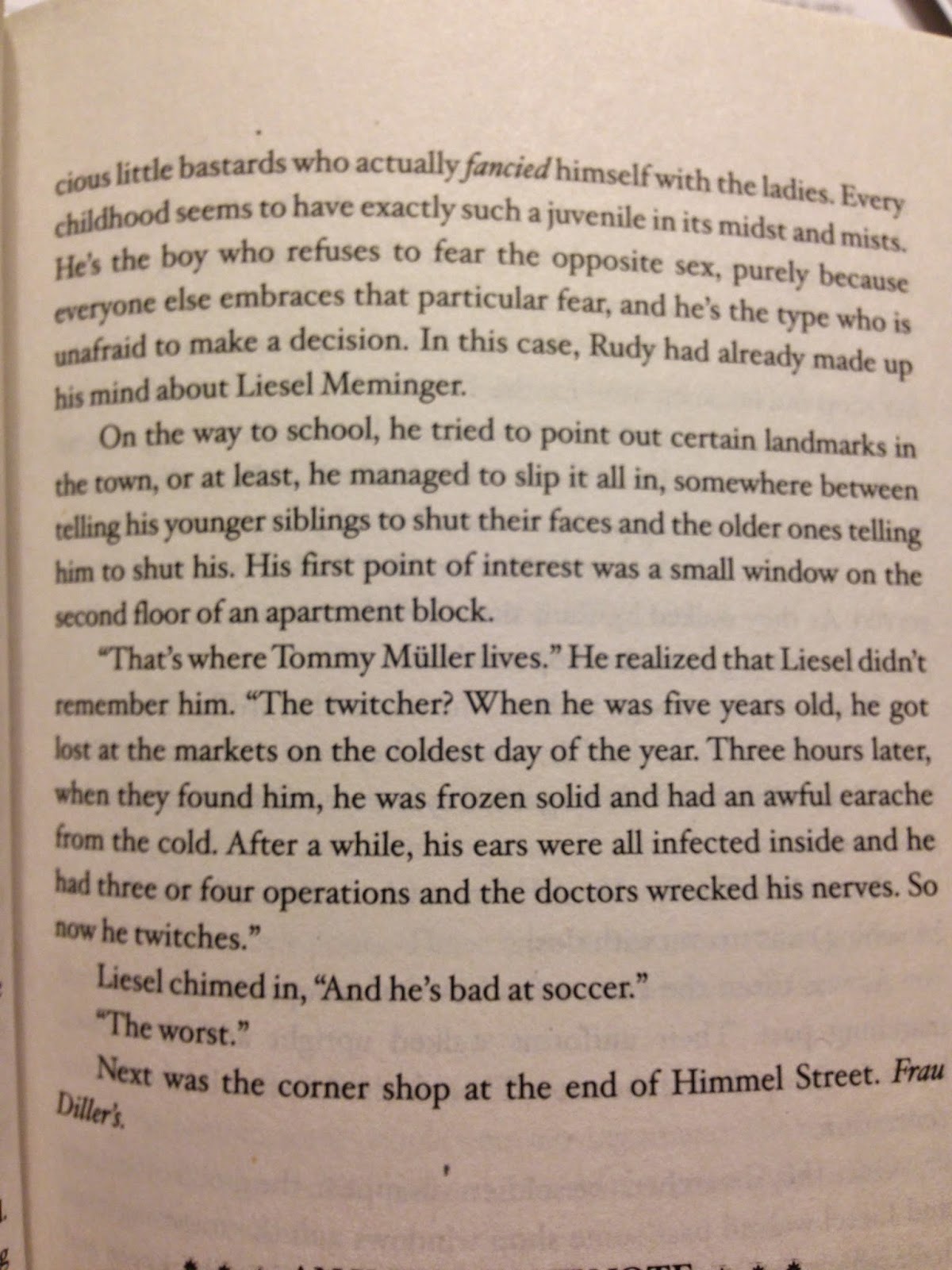 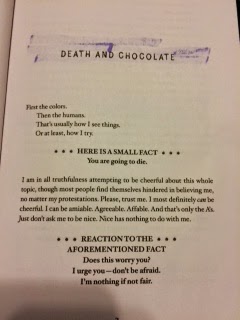 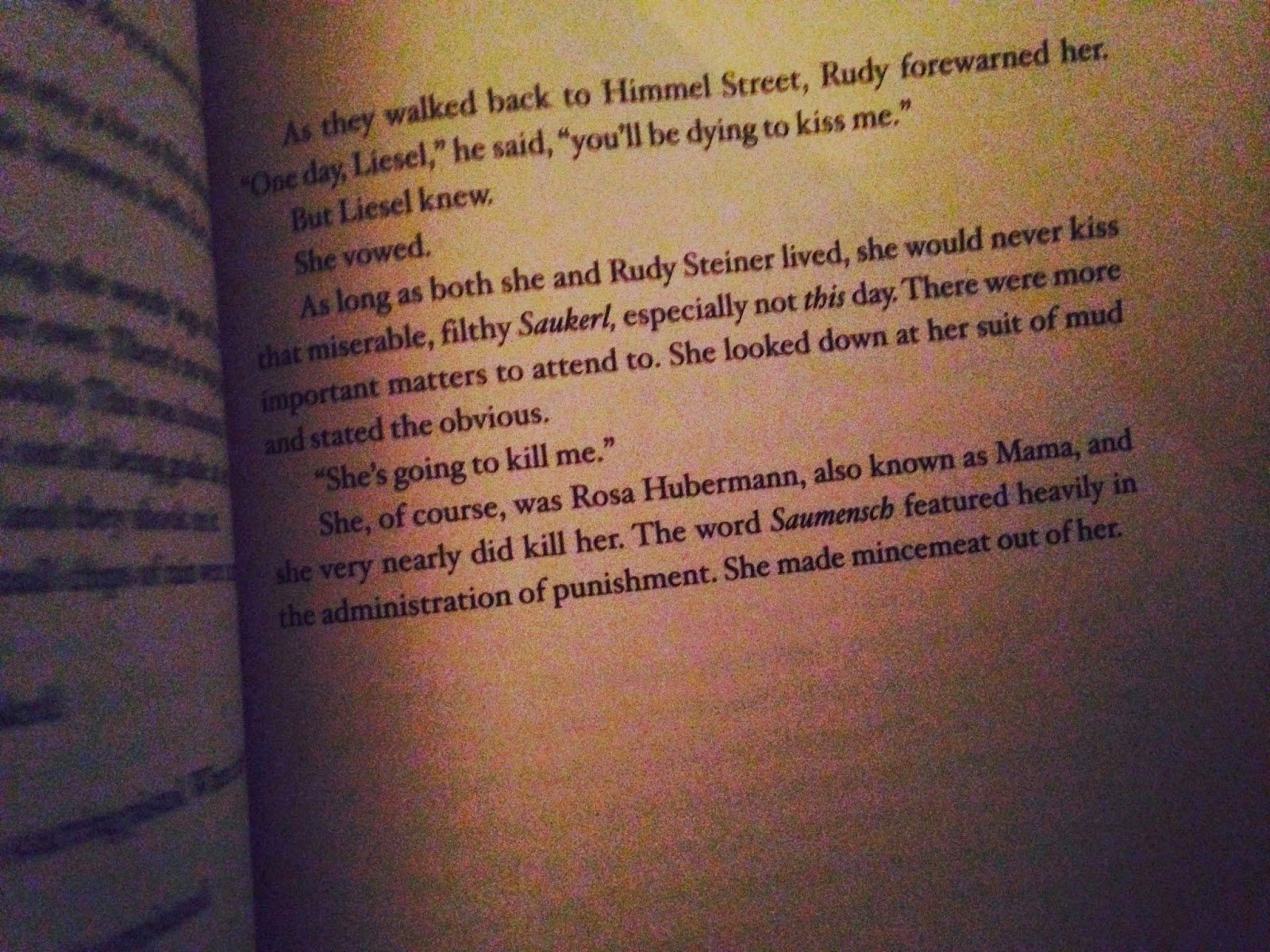 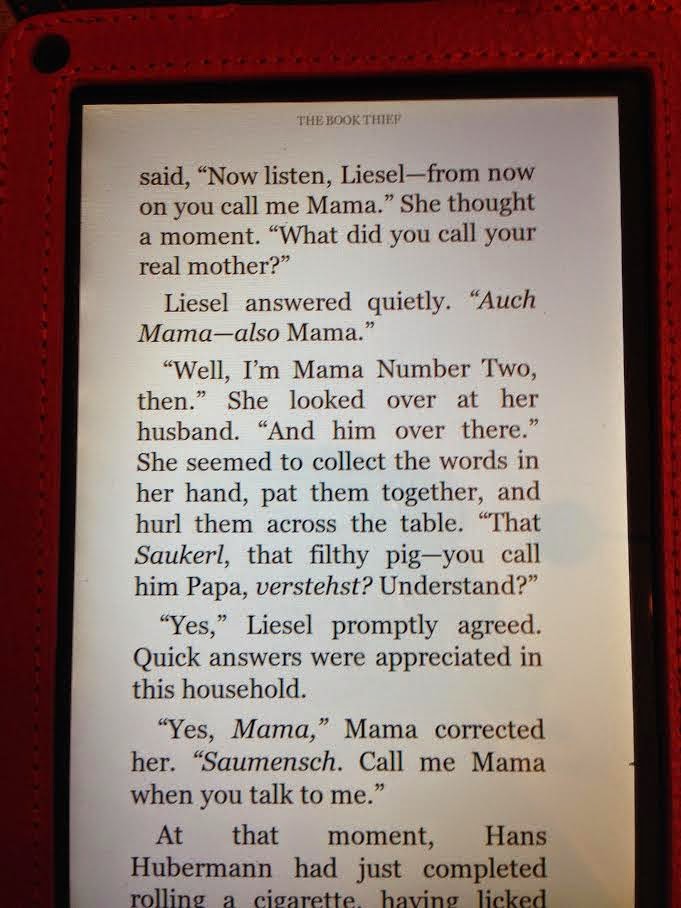 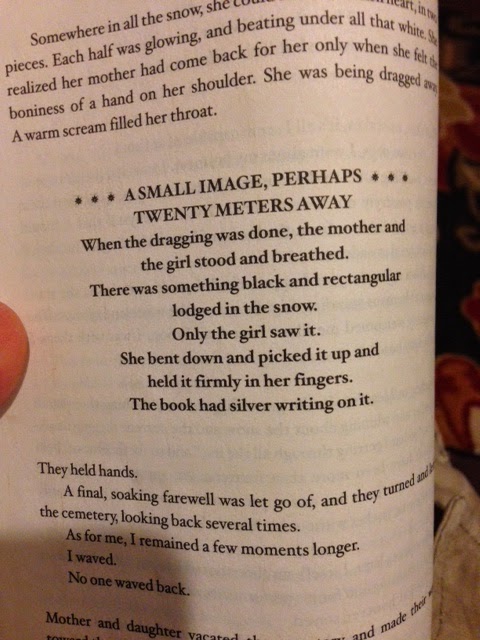 Posted by Unknown at 9:56 PM No comments:

One great way to hook a reader is to provide a compelling title for your piece of writing.  Many of you are still struggling with the idea of a creative title.

Challenge:  Go online to some newspapers and magazines.  Find examples of intriguing headlines. Tell me why a particular headline caught your attention.  Make sure to include the newspaper/article where you found the headline.

From The New York Times:  "What if You Just Hate Making Dinner"
While I do not necessarily "hate" making dinner, this headline grabbed my attention because I think the article may provide some tips for making the process easier and less of a chore.
Mrs. Powers


Make sure to comment with your name and period, and I will give you extra credit!

#extracredit
Posted by Unknown at 7:28 PM No comments:

I just came across the article on my Facebook newsfeed: Better Ways to Learn.  I totally thought I was going to gain new information on how to study and the best ways to learn and retain information.

There was something new.  I've always been a believer in the study session, and I'm surprised to see that research shows it may not be as effective as I thought.


For starters, long and focused study sessions may seem productive, but chances are you are spending most of your brainpower on trying to maintain your concentration for a long period of time. That doesn’t leave a lot of brain energy for learning.


However, there is some research that supports what I've come to realize over the years.  Here is one strategy I always try to instill in my own kids:


One way to signal to the brain that information is important is to talk about it. Ask a young student to play “teacher” based on the information they have studied. Self-testing and writing down information on flashcards also reinforces learning.

Read the article.  Does it change anything you believe about learning? Will you change your habits in any way?  Comment below.
Posted by Unknown at 8:04 PM No comments:

Julia Perillo's Stossel essay  (Food Nannies) was awarded a prize! She earned a spot as one of 50 semi-finalists and will be receiving a $100 check for writing an essay! Isn't that amazing?

Nearly 7,000 essays from students across the country were submitted to the contest, so all winning essays—even Honorable Mentions—were among the top 2% of all essays submitted.

To Eat, or Not to Eat
by Julia Perillo


While the government should try to inspire people to make healthy choices, it is not the government’s responsibility to force people to eat healthy. As New York Times reporter and author of Salt Sugar Fat Michael Moss says, “They may have salt, sugar, and fat on their side, but we, ultimately, have the power to make choices. After all, we decide what to buy. We decide how much to eat.” This quote illustrates the idea that people have the power and the choice to decide what they eat, not the government.  Personal decisions about which foods people will eat should not be disrupted by the government.
Having the freedom to make choices between many options is part of what makes America a unique, free, and desirable country to live in.  For instance, if the government were only to allow its citizens to practice one religion in this country, people would angrily protest for having their liberty taken away.  The same goes for food.  People should have options and freedom to consume whatever they want without government interference. While the government should inspire and motivate people to live a healthier lifestyle, the government is not responsible for banning certain types of foods and limiting options for the public. The Declaration of Independence states that people have natural born rights to  “life, liberty, and the pursuit of happiness.”  To clarify, by creating bans and restrictions that limit people’s food options, the government is denying Americans their natural right to live their lives the way that they want.
When the government imposes health requirements on certain corporations, it costs the corporations a great deal of money and these requirements are often ineffective. As John Stossel mentions in his Fox News hour Myths, Lies, and Complete Stupidity, the government is forcing big corporations to post clearly visible calorie counts on their menus.  This costs the companies money and time to change their promotional materials and signs, and to research and calculate the number of calories in their offerings. Ironically, studies have shown that even with these calorie counts clearly visible to patrons, people actually consume more calories than they would without access to nutritional information.  Evidently, the government’s costly regulations are pointless and inefficient.  Moreover, government is forcing companies to incur an expense, yet there is no health benefit to the consumer.  Furthermore, New York City’s former mayor Michael Bloomberg banned establishments from selling “supersized” sugary drinks.  However, nothing is stopping people from buying bigger drinks from the supermarket or purchasing more than one large cup. The fact of the matter is, if someone wants to live an unhealthy life, they will find a way to do it. The government’s bans do not affect their decisions, and can end up causing companies to waste money.
Because the government now pays for some people’s healthcare, some argue that the government should play a bigger role in keeping people healthy. Obamacare has turned healthcare into a government issue.  People who are obese have a much higher risk to develop high blood pressure, diabetes, and heart disease.  On the other hand, not everyone was in favor of Obamacare and not everyone receives Obamacare. Additionally, people who do not receive socialized healthcare should not be forced to be healthy since the government does not pay for their health care.  Though the government should inform people about healthy living, they should not be allowed to ban things on the basis of government health care that not every citizen is receiving.


Congratulations to Catherine Wu who placed first in the Manga category for her short manga based on "Part 1: The Grave Digger's Handbook" of The Book Thief by Markus Zusak. Her piece will move on to the district competition. Click on the link below to check it out!


The Book Thief Manga by Catherine Wu
Posted by Unknown at 7:47 AM No comments:

Congratulations to Ryder Kaplan who one first place in the Rap (Spoken Word) Poem category. His poem will move on to the district competition.


“Hey, son, go play with the other kids!” Dad shoutin’ from the hallway.
“No, I’m busy!” conversational relay.
Race of his emotions; fingers tap tap tap at the keyboard.
“No wonder they call you a fat nerd!”
Well, Dad, you don’t see it, teachers can’t believe it -
Your son’s a lyrical miracle, a true genius.
Tappin’ the keys when the other kids were tappin’ their feet.
Tryin’ to compete for a position as a top athlete.
None have won some still believe
They can run and run to a career victory.
But not your son, no, he has bigger dreams.


Your son wants to be a poet -
A master of the written word, mended by metaphors
Assisted by alliteration.
His mind’s racing, pacing back and forth, in his room contemplating.
Happiness in writing his feelings, but they’re all locks; the keys keep changing.
He sits in his room alone, with his own thoughts,
There’s treasures in his mind, dad’s bringing him down; he can’t open up his own vault.


Flash forward -- it’s senior year.
Dad in the aisle; son’s surrounded by his peers
Watching in awe at his awesome academic achievements,
But Dad’s still not proud .
A valedictorian of the written word
“Gee, Dad, this fat nerd really got heard!”
With praise from the whole school,
And he didn’t have to drown in the pool of liquor.
It was evil snickers
That would come with athletic dreams.
He never let his dad’s lack of approval come between
His poetic dreams and as he stands on the pedestal; it’s quite a scene.
The boy’s complete dream, not deemed worthy
Just because his father wanted an athlete on the football team,
But it’s all OK, because at this moment right now, on this pedestal
Diploma being forked over by the principal or some older
Man that isn’t Dad but he’s glad that he had
This opportune opportunity to tune out of the cartoons and Dad’s rules
And it ended well, for his son, and Dad thinks to himself
“Hey, maybe he’s done with my vision, and he may be fat


But he pursued his dreams, did great, and I love him for that.”

Posted by Unknown at 8:28 AM No comments: